Cathedral of Our Lady Assumed into Heaven & St Nicholas 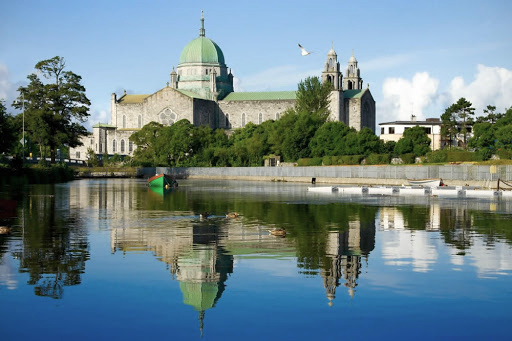 A Cathedral is the principal or mother church of a diocese with which the bishop is officially associated. The cathedra (Latin: "chair", from Greek, kathedra, "seat") is the chair or throne of a bishop. It is a symbol of the bishop's teaching authority in the Church.

In 1484, the Church of St Nicholas in Galway became a collegiate church, with a warden and vicars (see History). However, with the Reformation, after 1570, the Catholic people of Galway lost the right to practise their religion publicly. Mass was celebrated in private houses until the rigours of persecution moderated, and a parish chapel was built in Middle Street about 1750. With the establishment of the diocese in 1831 the parish church became its pro-cathedral. A fund for the building of a more fitting cathedral was inaugurated in 1876, and was built up by successive bishops.

In 1941, Mr Eamon Corbett TD, chairman of Galway County Council and acting on behalf of the Council, handed over the key of the disused Galway jail on Nuns Island to Bishop Michael Browne as a site for the proposed new cathedral. The old jail was demolished and in 1949 J.J. Robinson of Dublin was appointed architect for the new cathedral. Planning continued until 1957 when Pope Pius XII approved the plans submitted to him by Dr Browne. Cardinal D'Alton, the Archbishop of Armagh, blessed the site and the foundation stone on 27 October 1957. The construction began in February 1958, undertaken by Messrs John Sisk Ltd of Dublin. The people of the diocese contributed to a weekly collection and donations were received from home and abroad. The total cost, including furnishing, was almost one million Irish pounds.

Pope Paul VI appointed Cardinal Richard Cushing, Archbishop of Boston, Pontifical Legate to dedicate the cathedral which took place on the feast of the Assumption, 15 August 1965.

According to site maps, the Bronze Doors of the cathedral face geographically north. There is, however, a historical significance, from the Middle Ages, attached to the main doors of churches and in particular, cathedrals. When celebrating the Sacred Liturgy the priest traditionally faced ad orientem, and the doors behind him were referred to as the "west-facing doors"; the theological "east-west" axis. This custom of referring to "west-facing" doors took on greater significance when catechumens being admitted to the Church deliberately faced the West Door during their ceremony of admission and denounced the secular world in favour of the Christian ideals to which they now aspired. It was also the practice to refer to the main door as west-facing irrespective of the geographic direction. This website utilises this ancient theological significance rather than the geographically correct one.